DJ Bedz a.k.a. Cassidy Bednark was born in Boulder, Colorado. DJ Bedz’s very first encounter with rap music came when his mother bought him a copy of “King of Rock” by Run-DMC in 1984. Soon after, Bedz developed a fascination with rap music and the sociology interwoven into the fabric of hip-hop culture. After graduating high school, Bedz matriculated to Occidental College in Los Angeles, California. Occidental was, and continues to be, one of the finest private colleges in the country. Occidental also specializes in multicultural studies while maintaining one of the most diverse student bodies in the nation. While at school, Bedz was able to study the dynamics of sex, class, and race while majoring in Music Composition and serving as a Residence Adviser for the multicultural dorm on campus. College was also when DJ Bedz first tried his hand at deejaying after getting turntables as a Christmas present. Soon after, Bedz was doing house parties and Greek events at Occidental.
After moving back to Colorado in the late 1990’s, Bedz fully immersed himself into the pursuit of deejaying as a potential career, highlighted by the unrelenting production and distribution of mixtapes. Later on, after hundreds of titles and hundreds of thousands of mixes in circulation, Bedz would come to be known as the “Mixtape King of Colorado”. The guerrilla marketing paid off, and by the turn of the decade Bedz found himself working in the Denver nightclub scene regularly and networking with many of the important figures in the Colorado music scene.
During the early 2000’s many important doors began to open for Bedz, especially in the world of formal, high-profile DJ positions. With the help of good friend and fellow Radio Bums crew member DJ Chonz, Bedz landed his first job in radio as a weekend mixer at KS107.5. It wasn’t long before Bedz was also producing mixes for the nationally syndicated radio company ZeoMix. Then in 2003 DJ Bedz landed the job as the official team DJ of the NBA’s Denver Nuggets. With basketball and music being the two primary passions in his life, Bedz had secured his dream gig and significantly raised his profile all at once. By the midpoint in the decade Bedz established a relationship with the National Basketball Association that led to his being invited to spin every year at the NBA All-Star Game. As a result of his inclusion in the 2005 NBA All-Star Game in Denver, Bedz appeared on the popular BET television show Rap City, becoming the first ever deejay from Colorado to be featured on the program.
2008 represented another landmark year in the expansion and development of the DJ Bedz brand. On a whim, Bedz entered and ended up winning the Pepsi Superstar DJ Competition – earning him an honorary spot on the Pepsi DJ Division. Soon thereafter, Bedz was asked to become a weekly mixer on Satellite Radio’s XM 66 Raw, and “White Shadow Radio” was born. 2008 also meant change on the home front for Bedz, as he took a job locally for Hot 107.1 FM and established the FM version of “White Shadow Radio”. His FM mix show was soon picked up by stations in Colorado Springs and Wichita.
The later part of the 2000’s is also when Bedz begin to dive into philanthropy and became more in active trying to have a positive impact on the Denver community. To that point, Bedz has been donating 100% of the sales of his mixes to Safehouse Denver (www.safehouse-denver.org) since 2008. Safehouse Denver is a non-profit organization that is committed to helping protect women and their families from domestic violence. In 2018 Safehouse awarded Bedz with the Susan Noble Community Impact award. To this day, Bedz remains active in his relationship with Safehouse serving as a part time spokesperson and third-party financial contributor, along with organizing fundraising events to benefit the group.
During the beginning portions of the 2010 decade, Bedz was able to continue to enjoy consistency and success in radio. DJ Bedz signed on to become a mixer and on-air talent for 95.7 The Party in Denver in 2010, and remained there in a prominent role until 2016.  While at The Party, Bedz syndicated his mixshows down in Colorado Springs, with a nightly presence on 98.9 Magic FM.
2014 also represented an enormous step forward for Bedz. In the early part of the calendar year he was invited to deejay and host basketball, football, and volleyball games for the University of Colorado Buffaloes. And then when summer rolled around it was announced that Bedz would become a deejay for the NFL’s Denver Broncos. The announcement about the Broncos gig raised a considerable amount of excitement both regionally and nationally, and must be considered one of DJ Bedz most significant accomplishments to date.

Currently, you can hear DJ Bedz as on-air talent for Flo 107.1 Denver (KFCO) Monday through Friday for the “Floback Mix @ Noon” and the “5 O’Clock Mix Block”. He also contributes as an on-air jock on weekends. All this while continuing to balance duties with the Denver Broncos, weekly nightclub residencies, special events, and Safehouse Denver. With 20 years now under his belt, there is little doubt that talented, hardworking professionals like DJ Bedz will help to carry the entertainment torch in the Rocky Mountain region for a long, long time. 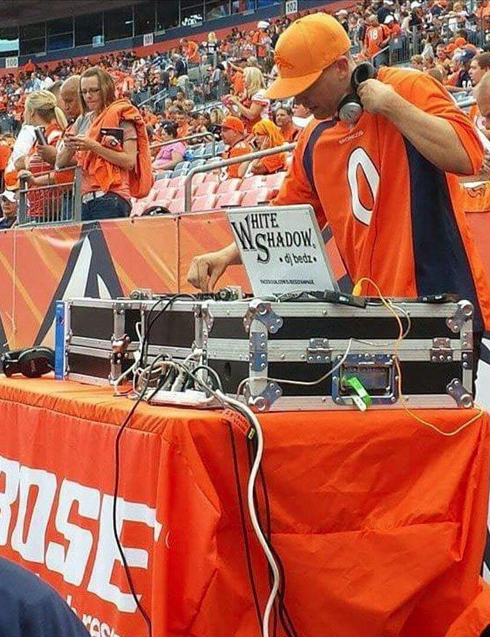